Non-essential travellers entering Canada through the land border will need to provide proof of a negative COVID-19 test before arrival as of Feb. 15, Prime Minister Justin Trudeau announced Tuesday.

The prime minister said border officers can’t legally deny entry to Canadians, but those who show up without proof of a negative test could face fines of up to $3,000.

“What we can do is in cases of no test to show [is] apply a stiff penalty, a fine and demand and ensure a rapid and complete followup to make sure that they are getting tested, that they are being properly quarantined, that they are not putting at risk the safety of other Canadians by returning home without a clear negative test,” Trudeau said.

Dr. Theresa Tam, Canada’s chief public health officer, said last week there is no exemption yet for Canadians who have already received a vaccine.

“The vaccines we have are very effective for individual protection and that’s what we might expect, but you as an individual do not know whether you are completely protected or not,” she said Friday.

Most of the people who cross into Canada are actually exempt from quarantine, largely because they are considered essential workers.

The Canada Border Services Agency said that between March 31, 2020 and Jan. 24, 2021, close to 8.7 million travellers came to Canada; 74 per cent of them were exempt from the 14-day quarantine measures. The number is even higher at the land border alone: 92 per cent of those crossing the border were exempt during that time period. 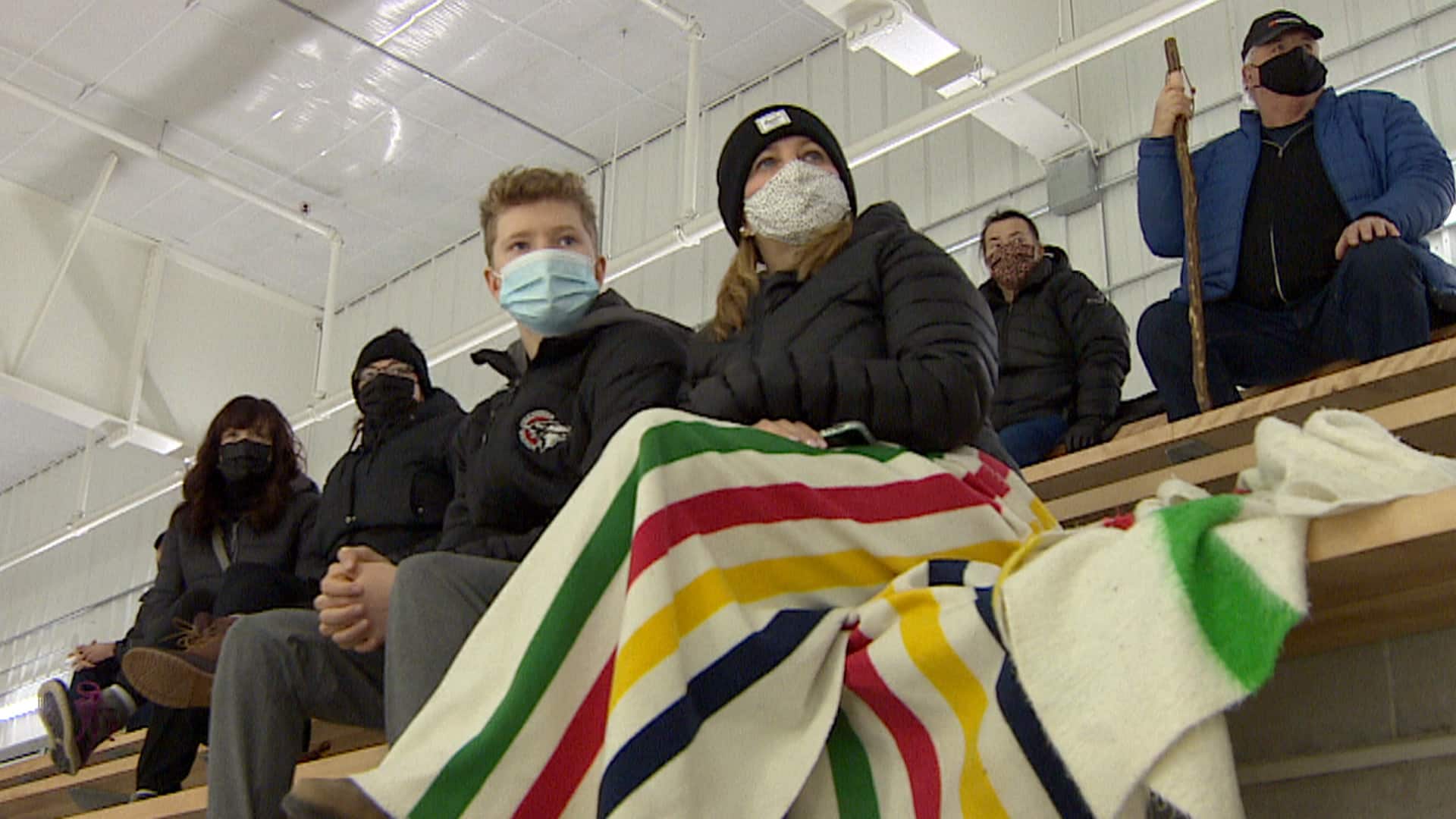 Nova Scotia’s success with COVID-19 restrictions has allowed residents to experience freedoms unseen in most of the country — team sports with fans and 100-person events. 2:01

With thousands of Ontario students returning to in-person classes next week, the Ministry of Education recently announced it can provide up to 50,000 rapid antigen and PCR tests per week as a key element in its plan to curb the spread of COVID-19 and reopen schools safely.

COVID-19 testing is overseen by Ontario Health, a provincial agency responsible for co-ordinating health care. But much of the decision-making on how the tests will be used has been left up to individual public health units. While regions have different caseloads, the lack of a specific framework from the province has some parents concerned, especially at a time when more transmissible variants of the virus have been detected in Canada after first being discovered elsewhere in the world.

“Testing is how we know where we’re at … in terms of how effective safety measures are within schools,” said Jessica Lyons, a nurse and a member of the Ontario Parent Action Network.

Ontario’s ministries of education and health said in an email that they were working with “mobile testing vendors to support the delivery of targeted testing in schools and child-care setting[s] across the province when local public health units have identified need.” The email also said that if a student or teacher tested positive for COVID-19 with a rapid antigen test, they would be referred for a lab-confirmed PCR test — the test performed in COVID assessment centres — to confirm the result.

However, the response did not make it clear whether or how the results of those tests would be linked back to schools to determine whether or not COVID-19 cases — including the variants of concern — were spreading there.

“Obviously, each health unit or each [school] board, you know, may have different circumstances,” said Ashleigh Tuite, an infectious disease epidemiologist at the University of Toronto’s Dalla Lana School of Public Health. “But, you know, you would expect that there would be some sort of guidance that’s provided by the province.”

Peel Region Medical Officer of Health Dr. Lawrence Loh told Nicole Ireland of CBC News that his understanding was that Ontario Health would be providing mobile unit staff who would conduct asymptomatic testing and that Peel public health would direct them to where it was most needed.

Loh said he was still waiting for confirmation of that, as well as more details from the province about what resources would be available to them. Representatives from Toronto and Durham region also did not have specific details when responding to CBC inquiries.

“When a case is detected in a school, we need to be very strict about rapid and automatic dismissals,” said Loh.

Read more about the situation

Manitobans will once again be able to visit restaurants, gyms and arenas beginning Friday, as the province is set to relax the partial lockdown it has spent months enforcing.

But provincial officials said Tuesday they won’t budge on who can dine together at a restaurant. The province will only allow household groups to share a table.

“We are proceeding with caution,” Premier Brian Pallister said at a news conference Tuesday morning.

Gyms, tattoo parlours, nail salons and libraries can all welcome Manitobans inside as well, albeit with strict conditions and a 25 per cent capacity requirement. Places of worship can welcome parishioners, but at a stricter 10 per cent capacity or 50 people, whichever is lower.

Museums, art galleries and yoga studios also have permission to open, while individual instruction can proceed at gymnastics clubs and martial arts studios

Manitoba, which saw three-digit case numbers nearly every day from late October through January, recorded 75 new coronavirus cases in the latest daily report, with 94 recoveries. Three more Manitobans died, bringing the total lives lost over the course of the pandemic to 853.

Read more about the what’s new in the provincial orders

While several Western nations are hoping to help other countries with mass vaccination through the COVAX global alliance, Russia, China and India are notable for having engaged in a more direct exchange through vaccine deals with individual nations, writes CBC’s Evan Dyer.

Russia’s claims last summer about its Sputnik V drew skepticism as it was deployed before significant data was publicly available, but recently The Lancet medical journal said a full placebo-controlled study with more than 20,000 participants found “a consistent strong protective effect across all participant age groups.”

That was welcome news in Iran and Argentina, where officials had agreed to deploy Sputnik shots.

“Argentina’s drug regulator had never before approved a drug that hadn’t already passed muster with either the [U.S. Food and Drug Administration] and the [European Medicines Agency]. So there was a lot of concern in the Argentine medical establishment,” Buenos Aires journalist Victor Ingrassia told CBC News.

China’s Sinovac vaccine has been sent to many more countries than Sputnik V. China has set aside $2 billion to fund vaccinations in Africa and has made available another $1 billion for Latin American governments to buy its vaccines on credit.

Brazil, which has been ravaged by the virus, is particularly dependent on the vaccine working. China claims 79 per cent efficacy for its shots, but those claims are in question, said China-watcher Lynette Ong of Toronto’s Munk School of Global Affairs and Public Policy.

“I think the biggest issue is the trust deficit,” said Ong.

“When Pfizer or AstraZeneca put out a number, we have no a priori reason to question that number. But when Chinese authorities or Chinese companies give you a number, you need justification to trust that number, because of what happened in the last 12 months,” she said, referring to dissembling from China as to the origins of the virus in Wuhan.

India, meanwhile, is producing vast quantities of AstraZeneca’s vaccine under licence, as well as producing its own Covaxin — which, like Sputnik V, was rushed to market under a somewhat dubious process but still seems to work.

India is giving its vaccine away to neighbouring countries free of charge, with recipients including Bangladesh, Nepal, Myanmar and Mauritius — a gesture of generosity so far unique in the world and, writes Dyer, a reflection that India wants to win influence in Asia at the expense of its frequent rival, China.

WHO says coronavirus unlikely to have leaked from Wuhan lab

What are the origins of the novel coronavirus?

It is a question that has been hotly debated for 14 months, and one likely to be examined for months and years to come.

Embarek is at the end of a visit to the central Chinese city, where a team of scientists is investigating the possible origins of the virus that causes COVID-19.

The first cases were discovered in Wuhan in December 2019. The Wuhan Institute of Virology has collected extensive virus samples, leading to allegations that it may have caused the original outbreak by leaking the virus into the surrounding community. China has strongly rejected that possibility and has promoted other theories that the virus may have originated elsewhere.

The WHO team, consisting of experts from 10 countries, is considering several theories for how the disease jumped from animals to humans.

A popular theory is that it originated in bats before being passed to humans through another species of wild animal, such as a pangolin or bamboo rat, which is considered an exotic delicacy by some in China. Transmission through the trade in frozen products was also a likely possibility, Embarek said.

As the pandemic drives online shopping, many business owners say the federal government needs to help convince credit card companies to provide some relief on the fees charged to merchants.

A key business cost from credit card transactions is what’s known as interchange rates. These are essentially handling fees that are set by the credit card company, paid by the payment processing company to its bank, but ultimately covered by the merchant that made the sale.

In 2018, the federal government struck deals with Visa and MasterCard to lower their average interchange rates charged to merchants on credit card transactions from 1.5 to 1.4 per cent.

“In the spirit of being in this together, Canadians would hope that the banks and card companies would have stepped up and voluntarily reduced their fees,” said Sands. “But that did not happen, and calls to do so have been met with a deafening silence.”

Giancarlo Trimarchi, owner of Vince’s Supermarket in Sharon, Ont., says his company is paying more than ever during the pandemic — typically “well over” two per cent for online and phone orders.

“It doesn’t sound like a lot, but an extra 15 or 20 basis points on something that we can’t control is frustrating, because we have to find a way to mitigate that extra cost,” he said.

While consumers don’t pay those interchange fees directly, the costs are typically embedded in the prices businesses charge. Trimarchi said he doesn’t want to raise his prices, but he also needs to maintain the slim profit margins that are typical in the grocery business.

In a statement to CBC News, Mastercard said it remains committed to its “voluntary agreement with the Government of Canada” to reach the 1.4 per cent rate target.

Isaiah Archer of Whistle Buoy Brewery Company in Victoria says he and his four partners are seeing higher charges than that for plastic payments. It adds up; a full 99 per cent of their sales are from credit card transactions these days.

“It’s costing us more to make less, is the simplest way to put it,” said Archer.

Read more reaction from the owners

Find out more about COVID-19

For full coverage of how your province or territory is responding to COVID-19, visit your local CBC News site.

To get this newsletter daily as an email, subscribe here.

See the answers to COVID-19 questions asked by CBC viewers and readers.

Still looking for more information on the pandemic? Reach out to us at covid@cbc.ca if you have any questions.