The Biden administration urged China to do more to respect the intellectual property of US firms, signalling that the US will maintain pressure applied under Donald Trump to crack down on commercial crimes ranging from IP theft to counterfeiting and digital piracy.

President Joe Biden’s administration urged China to do more to respect the intellectual property of American companies, signaling the U.S. will maintain pressure applied under Donald Trump to crack down on commercial crimes ranging from IP theft to counterfeiting and digital piracy.

The Trade Representative’s office in Washington kept China on its “priority watchlist” of nations whose practices require monitoring. It noted that China’s patent, copyright and criminal law has been amended in the past year. “However, these steps toward reform require effective implementation and also fall short of the full range of fundamental changes needed to improve the IP landscape in China,” the report released Friday stated.

The annual review found that the pandemic has worsened some intellectual-property protection problems, given the accelerated shift to online shopping. The USTR also highlighted a move in recent months by Chinese courts that “broadly prohibit right holders from asserting their patents anywhere else in the world,” and expressed concern about comments from President Xi Jinping “about promoting the extraterritorial application of China’s IP law.”

“Widespread counterfeiting in China’s e-commerce markets, the largest in the world, has also been exacerbated by the migration of infringing sales from physical to online markets, which accelerated during the Covid-19 pandemic,” the report said.

U.S. officials are reviewing the actions Trump took against China that sparked a trade war between the world’s largest economies. Biden criticized Trump’s go-it-alone strategy toward Beijing, but the White House in recent weeks has signaled a willingness to keep applying tough economic and diplomatic pressure. 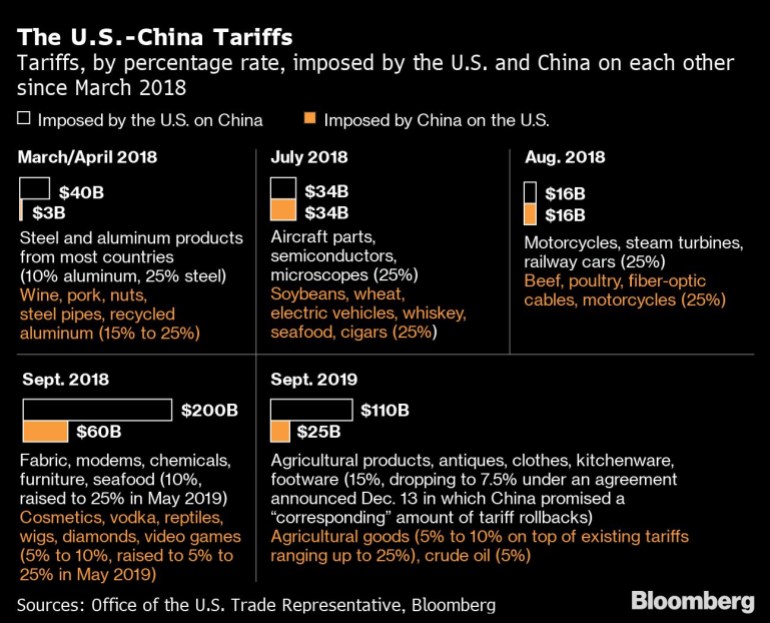 The IP report, which carries no immediate penalties and “seeks to be a positive catalyst for change,” is meant to draw attention to the need for nations to protect the interests of foreign investment and multinationals doing business in their markets. The priority watchlist also includes Argentina, Chile, India, Indonesia, Russia, Saudi Arabia, Ukraine and Venezuela.

Algeria dropped from that list to a lower-level watchlist this year. The United Arab Emirates was removed from that watchlist.

USTR Katherine Tai has repeatedly said that China needs to deliver on the promises made in phase one of a trade deal reached under Trump at the start of 2020. Commerce Secretary Gina Raimondo said this month that Beijing “doesn’t play fair,” and that the U.S. has to do what it takes to ensure American workers “have a shot.”

In that agreement, Beijing pledged to combat Chinese companies’ theft of American intellectual property and to do more to enforce IP rights in the country. China also promised to purchase more American products but missed its 2020 trade-deal targets as the global pandemic disrupted shipping and supply chains.

Friday’s report said “the United States has been closely monitoring China’s progress in implementing its commitments.”

The report listed a raft of continuing concerns about China’s judicial system proving to be an ineffective advocate for protecting IP rights of foreign companies. The USTR also said, “A truly independent judiciary is critical to promote rule of law in China and to protect IP rights” — something the Chinese Communist leadership is unlikely to embrace.

While the deal acted as a cease fire in any escalation of the trade war between the two countries, tariffs remain in place on about $335 billion of Chinese goods annually.

Trump used export controls under the Commerce Department’s Bureau of Industry and Security to limit the sale of cutting-edge technology to China. Biden is following the same path, expanding a crackdown that began under Trump with curbs on exports to Chinese companies like Huawei Technologies Co.

USTR is required by law to identify countries that don’t adequately protect IP or deny market access to U.S. companies that rely on IP protection. USTR can launch investigations against countries on the priority watch list under section 301 of the Trade Act of 1974. The Trump administration used that section to investigate China.

Trump slapped the tariffs on Chinese products in 2018 after USTR concluded that the nation engages in widespread violation of U.S. IP rights.