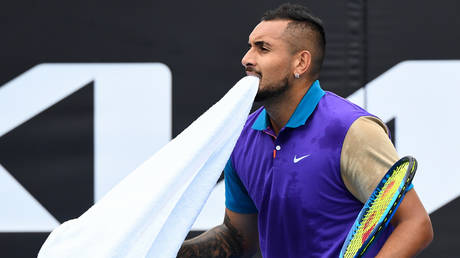 It didn’t take long into Nick Kyrgios’ return to the tour for him to be involved in yet another furious bust-up with tennis umpires after the Australian firebrand slammed officials for penalizing him for a time violation.

Just two matches into his return at the Murray River Open after sitting out most of 2020 due to the Covid-19 pandemic and it seemed as if normal service had resumed for Kyrgios, the Australian player whose controversial antics on the court have often outshined his efforts on it, after he branded umpires as “peanuts” after it was deemed that he was taking too long to serve in his match with Harry Bourchier.

Kyrgios appeared to be in his swing motion ahead of his serve when officials determined that his 25-second time limit had elapsed, prompting a furious – if somewhat predictable – riposte from the antsy Aussie.

“I’ve just started serving! What are you talking about?!” 😡Nick Kyrgios refuses to play after a bust-up with the umpire over a time violation… pic.twitter.com/YZUlkDvWXX

After the call, an incredulous Kyrgios approached the umpire’s chair and announced, “I’m not playing, sorry mate.”

“It’s like you’re just doing it to be funny. Do you think you’re funny?” added Kyrgios.

Kyrgios then demanded to speak to a supervisor, telling him: “Tennis isn’t about him [the umpire]. He’s an extra so all this goes smoothly.

“I have to go back and forth to get my towel. Why do these guys think it’s about them?“

Shame his brains don’t match his ego. Could be one of the best out there, but stuff like this gets in the way too many times.

Just slap a suspension on him. Terrible role model for the kids

Kyrgios also repeatedly asked if he was to be fined for his outburst and only resumed play once he was assured that he wouldn’t be and after defeating Bourchier in straight sets (6-2, 7-6) told his opponent that he was tired of being singled out by umpires for his behavior.

“I want to talk about it now. I’ve lost enough money to these peanuts,” he said.

Kyrgios has frequently fallen foul of tennis authorities in the past. He was fined more than £90,000 and given a 16-week ban from the sport after he reacted angrily to a loss in 2019. He was also issued with an 8-week suspension for a perceived lack of effort in a match in which he was also censured for swearing on court.

Also on rt.com
‘Djokovic is a tool’: Nick Kyrgios slams complaints from quarantining stars as Tomic’s girlfriend is forced to ‘wash own hair’


However, and somewhat predictably, Kyrgios didn’t stray too far from the headlines during his 2020 hiatus. He was harshly critical of rival player Novak Djokovic for some of the Serb’s actions throughout the pandemic, such as hosting last summer’s controversial Adria Tour. Kyrgios has also hit out at Djokovic for a perceived anti-vaxx stance, as well as his demands for improved quarantine conditions in advance of the Australian Open.

Kyrgios also volunteered to help people in his home state of Canberra throughout Covid-19, while also being celebrated in the media for fundraising efforts to help combat the deadly bushfires in Australia last year.