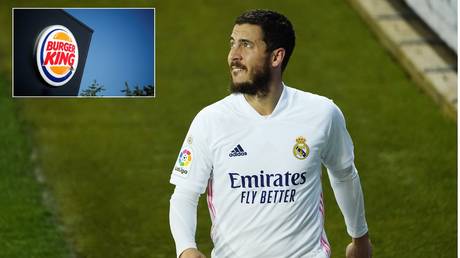 Eden Hazard’s time at Real Madrid has been plagued by injury and barbs about his weight, and fast food giant Burger King put the boot in amid a new setback by claiming the star missed training to make the most of a special offer.

The Belgian ace fulfilled a boyhood dream when he arrived at the Bernabeu from Chelsea in the summer of 2019, in a deal reportedly worth up to €150 million.

But that dream has rapidly turned into a nightmare as Hazard has suffered a litany of injury woes which have restricted him to just 35 appearances in the colors of Los Blancos.

The latest blow for the 30-year-old star came on Wednesday as Real confirmed that Hazard had suffered a muscle injury in his left leg, with reports claiming he could be out for around a month.

Eden Hazard is injured, again. Madrid have confirmed he injured a thigh muscle in training. Looks like 3-4 weeks out, so he’ll miss UCL last 16 first leg at Atalanta.

After Hazard missed training on Tuesday, Burger King took advantage of the situation to troll the star winger.

Quoting a tweet which had asked why Hazard had been absent, the fast food giant’s Spanish account suggested he had been availing himself of their special offer, writing: “2×1 at Burger King.”

Hazard has faced jibes in the past over his weight, and himself admitted that he had arrived for pre-season training at Real in 2019 with 5 kilos of extra padding.

“It’s true,” he told L’Equipe. “I’m not going to hide it, but when I’m on vacation, I’m on vacation. I had put on five kilos, I’m the type to put on quickly and lose so quickly if I’m careful.”

But with the Belgian suffering yet more injury woes, concerns continue to mount that Real Madrid fans will never see the best of the player who was so electrifying while at Chelsea.

The Burger King tweet – which was ‘liked’ more than 115,000 times – was called out by some for being insensitive.

“If to increase your profits you have to use strategies of insulting people, it seems unfortunate, pathetic company,” read one response in Spanish.

“I won’t buy a hamburger [from you] again in my f*cking life, clowns,” fumed another Hazard fan.

“I’ve looked at it like 10 times to see if the account was fake but it turns out not. Real Madrid or Hazard himself should denounce you for this. For a restaurant chain of this caliber to make this ‘joke’ is in very bad taste. Pathetic,” wrote another.

But others defended it as merely a joke, writing: “Don’t take it personally… We have all seen that he is chubby do not be angry.”

Hazard’s latest injury could rule him out of Real Madrid’s Champions League last 16 first leg against Italians Atalanta on February 24, as well as at least four La Liga games leading up to that fixture.

Hazard has managed 631 minutes of football for Real this season, scoring three times – twice in La Liga and once in the Champions League.

Zinedine Zidane’s men are facing a tough battle domestically and lie third in the La Liga table, level on 40 points with Barcelona but a full 10 points behind city rivals Atletico Madrid, who also have a game in hand.

Real are next in action against Huesca on Saturday, when Hazard will be watching on from the sidelines.